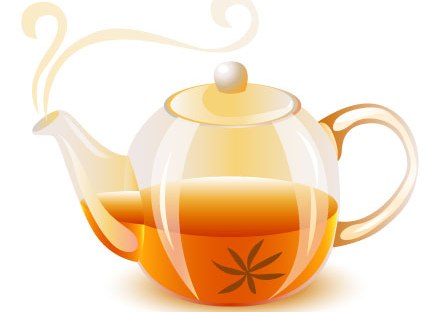 I wanted to honor the last holiday weekend of summer with an outside tea. Luckily, the weather was MORE than cooperative for it today.

A Pink Lemonade Cupcake recipe has been calling my name for some time, so I whipped those up this morning. VERY easy to make and VERY easy to eat! Basically it’s a white cake mix, mixed with 1 cup of pink lemonade mix and iced with buttercream icing.

I also had a Cranberry-Orange Scone Mix from King Arthur Flour burning a hole in our lazy susan, so I pulled that out and mixed in some chopped walnuts. In less than 30 minutes later, fresh scones from the oven. (continued under photo)

Dave has a partial set of old dishes that are hand finished “Nantucket” pattern dinner service by Woods, Burslem, England, Circa 1930’s. The dishes belonged to his grandparents in the 1930’s and were saved from a fire at the Bungalow Tea House in Ashland, NH when his mother ran in to save them. After our weekend in NH last week, I decided to use these for my sweet and savory treats today. They are the smaller ones pictured on the tea stand.

The tea stand I used to display the vintage dishes and yummies was a gift to me from my sister-in-law Nancy and her late daughter Kim. I think everyone in the McCausland family would have been pleased how I mixed the old with the new and with multiple generations represented at my tea today. Dave even joined me! Well, he joined me for the sweets, not so much the tea. LOL

The tea of choice today was a White Mandarin Pu-erh tea from Capital Teas a fifth generation tea merchant out of Annapolis, MD. I have enjoyed Tweeting with them on Twitter. I love how the tea is put into a mandarin orange shell, dried in a small packed cake, then sealed in plastic to retain freshness. This was a new tea for me a few months ago and I love it any time of day. I thought it was an appropriate citrusy tea for the cranberry-orange scones and lemonade cupcakes.

I’m not so sure the tea was the best for the turkey tea sandwiches I made, but it worked. I had some swiss cheese spread, sliced up some very thing red onion and used some smoked turkey slices for my tiny, crustless creations. Obviously, the lemon curd I used was for the scones.

I cut a little sedum from my garden for some beautiful hues of color at my tea table and even lit a small fire in the fire pit out on the deck.

It was a picture-perfect late summer, early-fall day. We won’t have too many more of these, so I hope to take advantage of as many as I can!